This quote from Woodnetter Burt got my attention in a big way:

“I’ve already sold a panel saw because of the EZ and in the next few days, I also plan to sell a unisaw, a Makita 12″ sliding compound and a Shopsmith overarm pin router. All three are being replaced by the EZ equipment.”

The EZ that has Burt selling off his tools is the EurekaZone Smart Guide System, a “multifunction, precision woodworking system.” 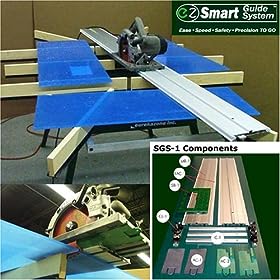 Burt’s a professional but he’s just one man so I asked the guys at WoodNet to tell me about the advantages and disadvantages of a guide system + circ saw vs. portable table saws (that was before I realized that Burt actually pits guides against stationary table saws).

Here’s another quote from Burt that sums up his position and shows the growing importance of the EZ guide in his operation:

“In my shop, the rail system continues to take over from the table saw for most functions. For the latest kitchen, we used a combination of a bridge system and a square to cut plywood. We cut 25 sheets of 3/4″ plywood. Time compared to a cabinet saw was cut at least 30%.”

Not all Woodnetters believe that guide systems and a great circular saw can replace their table saws and portable table saws though.

Ned said, “I use both and consider them complementary. The saw + guide for breaking down sheet goods and edge jointing, the portable table saw for smaller workpieces, dadoes, and thick stock.”

Lou Miller puts it like this:
“I still believe that the order of importance of these tools is (hobbiest or pro):

K. L, McReynolds, a WoodNet moderator, says: “The guides are a big help in more safely breaking down sheet goods. They are just as applicable with a circular saw as with a router.[…]

“However, on the job site, I use the portable table saw more for ripping and sizing framing/remodeling material—things the guides will not do.

And Now Back to Burt…
Because Burt has clearly cut a lot of wood very accurately with his EZ system. He respectfully disagreed with K. L, McReynolds (Mac) on just about every point:

Let’s start with the remodeling materials. I can take an EZ rail and rip 2x material – in fact up to 3″. I can add a square and cross cut plywood and solid wood more accurately than a table saw ever thought about. Need a tapered piece or an out of square piece of pw – no problem.

A few months ago, I mounted an Incra miter gauge on an EZ rail. Someone asked if it would do miters well so I made a frame like a picture frame – just quick cuts. The results were better than the results from most miter saws.

I have replaced my job site table saw with the EZ guide system. The guide system is more accurate and gives a better quality of cut while being much safer.

You said the rail will not make small parts. Let’s see if this is small enough. A couple of days ago, we had a regular woodworking customer in the shop and I was showing her what the EZ could do.

Sell Your Table Saw, Buy a Guide?
No. Not at all. Unless you’re Burt because that’s what’s working for him.

Look more closely at the Festool and EZ guide systems?

Yes I think you should. There may be a bit more application you can get out of them that could save you time and effort.

If you’re a DIYer looking for near-professional quality accuracy I think you would do well to consider the Festool or EZ guide system as a table saw alternative.

Hyperluminescent says it well:
“my point all along has been that the EZ system – for guys like me and most other guys who do this as a hobby or for DIY stuff – really does give you the quality and accuracy with almost no setup and much less expense and space taken up.”

And Mac says it best:
“there is room in a shop for both—-and neither is the best at every job.”