If you’ve been on the market for a biscuit (aka plate) joiner you know that the prices range pretty widely… From the $700 Festool Domino joining system (a joiner, but not a biscuit joiner) and $400 Lamellos right on down to $15 clamps and a $2 bottle of glue there are joinery tools and methods to suit every budget.

A post at WoodNet caught my eye recently when a woodworker asked: “I need reccomendations for a joiner, I know Lameno’s are good but they also cost too much. Does anyone have any reccomendations uner $200.”

The good folks at Woodnet certainly DID have some recommendations. Here they are, in order of the number of votes they got. I found it interesting that some woodworkers suggested he not get a biscuit joiner at all.

The runaway favorite is the Porter Cable 557… Check out the results of the best $200 biscuit joiner below. 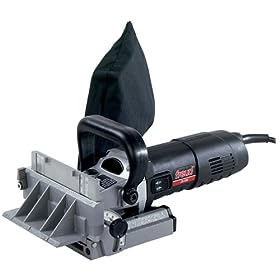 Other joining methods:
“One low cost way join boards for glue up is to use a 1/4 inch slot cutter bit in your router, works as well as biscuts for a lot less money. bb plywood makes good splines.”

I think your money is better spent on quality clamps for panels.

Other Resources:
Which biscuit joiner?? (WoodNet Thread)
The Seven Basics of Biscuit Joinery