Some people like boxing. I like a good power tool face off in the forums, where woodworkers start posting in ALL CAPS AT EACH OTHER in defense of their favorite brand. To me there’s a lot of good wisdom in these kinds of fist fights, er… conversations ;)

A recent WoodNet forum post asked about the Grizzly 1023 vs. a Unisaw. More specifically the poster found a really good deal on a Delta Unisaw (considered by some to be the best of the best cabinet saws) and wondered if it it was actually 50% better than the Grizzly 1023.

Here’s a breakdown of answers to the question: Is a Delta Unisaw 50% Better than a Grizzly 1023? 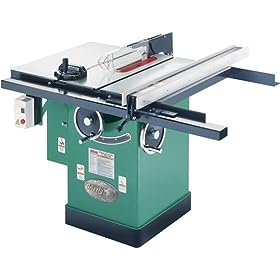 Many people cited phenomenal customer support from Grizzly, while only lackluster support from Delta. Here’s a direct quote from an owner of a Delta X5:

“I own a Delta X5 Unisaw with 50″ Bies fence. I got a great deal on mine from Amazon otherwise I would probably have a Grizzly TS in my shop. Having used the 1023 quite a bit and owning the Delta X5 I would say that there is not a 50% price premium between the two.”

Here’s the original thread: I hate questions like this… Grizzly or Delta TS?

More resources:
Does Anyone Hate Their Grizzly 1023 TS?
Grizzly 1023S Features
Grizzly 1023 (set up photos)
Grizzly Tools – What is Your Opinion?

2 comments on “Grizzly 1023 vs. Delta Unisaw and Craftsman Hybrid”