Not only do trim routers remain popular with woodworkers for functionality, but their relatively low price keeps them moving off the shelves. To find the top 10 trim routers we gathered up all the trim router reviews and recommendations by professionals, hobbyists from around the web.

>> Trim Routers: the What, When and Why
First and foremost some of you are asking why a trim router (aka laminate trimmer, laminate router or palm router)???

Here’s why – it’s small, gets into tight corners, is easy to control with one hand, offers greater precision on smaller jobs, trims edges like a champ. As RFeeser says in the WoodNet thread What’s so good about a trim router? “It’s the difference between a tack hammer and a framing hammer.” The funny thing is that many trim router users find themselves reaching for their trim routers as much as or more than their full size routers.

Note, most folks would NOT recommend that a trim router be your first or only router. Lumber Jocks sum this sentiment up nicely here: Thoughts on Bosch Colt Palm Router as first (and initially, only, router) If you’d like to read a bit more discussion to wrap your brain around the different applications of spinning cutters see the luthier forum discussion Dremel vs. laminate trimmer vs. router: which jobs for each?

One final consideration – Trend has begun making “hybrid” routers. They have more power than trim routers but still fit comfortably in one hand. The Trend T4 plunges, which was an ongoing forum gripe.

>>A Note on Variable Speed
I read time and again that variable speed is not a needful function on the trim router. For example, here’s challagan over in Router Forums: “There test showed that there just wasnt any advantage for the size of bits that these machines will use in having variable speed. Basically if the VS is needed then you are using too big of a bit in the machine. So if anyone is interested in this unit save the extra 20-25.oo and get the non VS machine.” Here’s that whole thread for anyone who’d like to read more: Laminate trimmer – is VS important?

>>A Note on Pat Warner Clear Bases for Trim Routers
Get one. Your trim router experience will improve because of increased bit visibility. This is the message I got time and again from forum goers. It doesn’t appear that he makes bases for all the available trim routers (who could?). He does have one for the Bosch PR20, which took the #1 trim router spot in our trim router top 10.

1) Bosch PR20EVSK Colt Palm Grip
There really was no contest for the #1 spot. All reviews and discussions point inevitably and relentlessly towards the Bosch PR20. Save yourself $20 bucks and go for the non variable speed. And BEWARE… some woodworkers had major issues with the Bosch that got them in a rage and posting horrible reviews due to spindle lock problems… we cover how to handle that below. 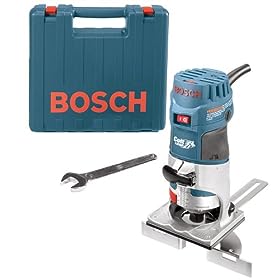 4of5 stars, 62 customer reviews in Amazon

NOTE: Shaft Wrench Spindle Lock Problems with the Bosch Colt!!
“There is a shaft wrench available free from Bosch. I called and requested it after reading about its availability on the WoodNet fourm. P.N. is 2610993579

I called Bosch at the number in the post and spoke with Mark. I told him I was looking for the part number in the post. He immediately knew what it was. Said they have them and if you mention there is a problem with the spindle lock they will send it out at no cost.”
wjt on WoodNet in Bosch Colt… you need three hands

2) Porter-Cable PC310
Though it’s no longer in production the PC310 takes second spot due to the heavy emphasis it gets from Pat Warner and many of the early trim router adopters.

Ranking:
7 Forum Recommendations
Pat Warner recommendation: “In my view, the PC 310 is the best of trimmers, not cheap, not perfect but a great tool nevertheless.”
No longer in production, may still be some PC310s left at Betterley Tools.
PC 310 trim router is lots nicer now! (SMC)

3) Ridgid R2400
The Ridgid is a steady performer with consistent good results in expert tests and from forum members. It has a tendency to run hot though.

Ranking:
14 Forum Recommendations
Top Ranking by Chris Marshall in Woodworker’s Journal, Dec. 2006
#2 Overall Brent Hull for Tools of the Trade: “Ridgid comes next. Just about everything is well thought through. The accessories are basic but well made, and although the base isn’t the best, the lifetime parts and service warranty is a great feature.”
“During testing we were pleasantly surprised by the power offered in such a small package. On the opposing side, the base design makes visibility difficult. This is the first trim router manufactured under the Ridgid name and while they got a number of things right, we still see room for improvement.” – David Thiel in Popular Woodworking October 22, 2008
“The fine-adjustment thumb wheel should be larger.” – Roy Berendsohn in Popular Mechanics
-multiple complaints that it runs too hot to handle
Ridgid Heavy Duty Laminate Trimmer Review by Tom Hintz
“Ridgid’s new R2400 laminate trimmer has several nice features and one glaring liability. The tool feels good in the hand, and height adjustments are easy. The variable-speed motor has a soft start and is quiet even at high speed. Bit changes, however, are awkward. Instructions suggest removing the base first, but that’s easier said than done. If you leave the base on, there is barely enough clearance to work a pair of wrenches on the collet.”
Kim Carleton Graves on the Ridgid R2400 for Fine Woodworking

Ranking:
10 Forum Recommendations
3of5 Stars LumberJocks: Harbor Freight 1/4″ Trim Router
3of5 Stars LumberJocks: Harbor Freight 1/4″ Trim Router
A bit of a scary situation with HF Trim Router from review:
“I was flush trimming 3/4 cedar attached to a 1/4 melamine/hardboard template last night and the bit climbed about 1/4” upwards out of the collet. I can deal with a lot of short comings, but that is a bit scary. I tried to check the variables (bit, collet, etc.) and couldn’t put my finger on the problem. The bit shank is fine and the collet was prperly tightened. That leads me to believe the collet must have loosened under load. I might have to stick to my Bosch trimmer.”

Craftsman 27715:
“Considering the $100 price we would have liked to see a collet lock on this router, and we would certainly expect a base that doesn’t slip during operation.”
David Thiel in Popular Woodworking October 22, 2008 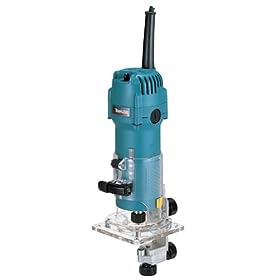 Ranking:
3 Purchase Recommendations from Forums
Editor’s Pick by David Thiel for Popular Woodworking
“During testing we found the Makita to have reliable power and the quietest operation of any router in the test. The Makita is comparable in performance and visibility to the Bosch, earning it an Editor’s Choice Award. The fine adjust is less convenient than on the Bosch, and we would have liked to have a spindle lock. That, mixed with the highest price in the test, makes it finish in second place behind the Bosch, but still worthy of recognition.”
“no fine adjustment, but nice machine, very basic and sturdy with good set of accessories” – John White for Fine Woodworking

Makita 3708FC: “Somebody overlooked the fine-adjustment knobs, which are annoyingly small. Also, the shaft that connects the knobs is too short. One careless turn too many unthreads the fine-adjustment assembly, which then falls apart.” Roy Berendsohn in Popular Mechanics

Could’a Been: Makita 3708FC: “The Makita is a mixed bag: The work light and plastic base were great, but the the nuts, bolts, and washers required for adjustment, along with the handle design, could use improvement.” Brent Hull for Tools of the Trade 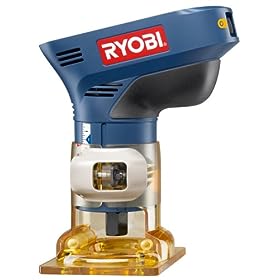 Ranking:
3 Forum Recommendations
“an adequate machine in situations where you can’t use corded – bearings in the collet aren’t great” – John White for Fine Woodworking
Ryobi One+ Cordless Trimmer/Router
Any Experience with the Ryobi 18V trim router?

9) Trend T4 Hybrid Router
There is not yet a great deal written about the Trend T4. Initial reaction from reviewers and users tells me there will be. It’s defining a new class of tool (hybrid router) and it has plunge functionality. You can be certain that the big league tool manufacturers are watching how this rookie performs.

Ranking:
#1 for Laminate Work: Porter-Cable 97310 “If you do a lot of laminate work, the Porter-Cable is an ideal system. The basic tool design and base setup were the simplest and cleanest.” Brent Hull for Tools of the Trade (2005)

Ranking:
“During testing we found the DeWalt to have good power, but the base design makes it very difficult to see where the cut is taking place.” David Thiel in Popular Woodworking October 22, 2008
5 Stars in Epinions DW670
Kim Carleton Graves on the DW673K for Fine Woodworking
“Advantages: The DeWalt is nicely balanced and has a side switch that can be operated with one hand.
Disadvantages: I couldn’t change the bit without taking off the base.”
4of5 stars in Amazon, from 6 reviewers
DeWalt D26670
“DeWalt (or Porter-Cable) should find a better way to mount the base to the motor so that you can slip the base on and off in seconds instead of fiddling with small parts. A tool this simple deserves simple base-mounting.”
Roy Berendsohn in Popular Mechanics 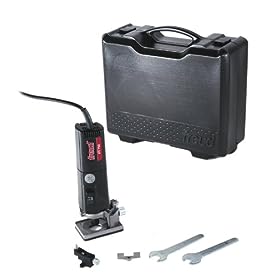 Ranking:
“While priced competitively with most of the pack, the Freud router is lacking in features, ergonomics and power.”
David Thiel in Popular Woodworking October 22, 2008
“-too heavy use for horizontal work -no fence, no way to add it”
John White for Fine Woodworking, June 25th, 2008
Forum Discussion
Freud FT750T Laminate Trimmer / Router (TalkFestool.com)

2 Forum Recommendations
“While the Grizzly H7790 was significantly less expensive than the other routers in the test, we didn’t feel that its performance and ease of use gave it enough of an advantage to call it out as a winner based on price.”
David Thiel in Popular Woodworking October 22, 2008 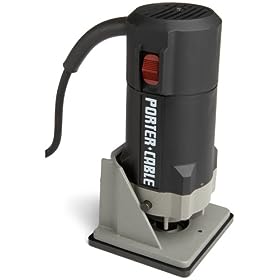 Ranking:
6 Forum Recommendations for the PC7310
“When compared to the similarly priced models in the test, the Porter-Cable tool falls short in performance and visibility.” David Thiel in Popular Woodworking October 22, 2008
Porter Cable 97311
“Advantages: This Porter-Cable model felt great in my hand, the switch is well placed, and the machine is stable.
Disadvantages: The round vertical-adjustment knob, which was only slightly knurled, was difficult to tighten. Vertical adjustment for the 90° base was hit or miss: The bit fell and tilted as I adjusted the height, then rose and straightend as I retightened the knob.” Kim Carleton Graves on the PC 97311 for Fine Woodworking

Ranking:
RYOBI TR45KT: “Performance was slightly better than the Craftsman during cutting, and as mentioned, visibility was slightly better. One obvious benefit over the Craftsman is the $20 savings. Unfortunately, that still leaves it at an $80 price which doesn’t make up for a balky base attachment, minimal features and less-than-perfect visibility.” David Thiel in Popular Woodworking October 22, 2008

Ryobi TR45: The crummy cord—it’s as stiff as a piece of frozen rope. Roy Berendsohn in Popular Mechanics

16) MLCS Marvel 40 Trim Router
The Marvel 40 looks promising, we just didn’t have enough info on it to place with the others.

>> Router Table Plan for a Trim Router: 3-in-1 Multi-Tool

This sweet little table makes it more of a PITA to use your trim router by hand. That’s why you need at least 2 trim routers!

>> My Trim Router Expert Review Sources:
The main benefit that expert reviews usually bring to the table are that they’re looking at multiple tools at the same time and comparing them based on the same standards. That’s why they have weight in the ToolCrib rankings.